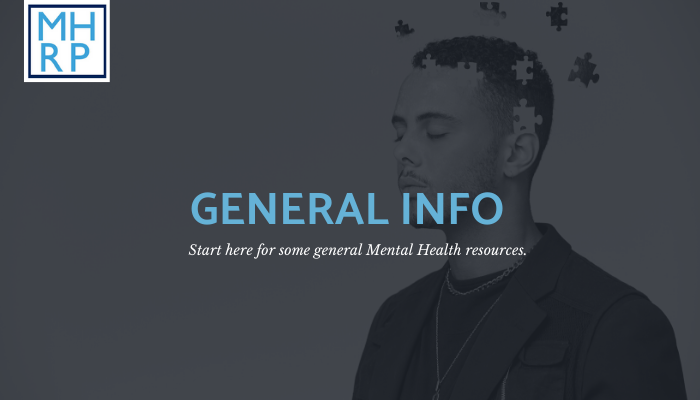 Mental health is just as important as physical health. Despite the stigmas surrounding mental illness, it is crucial to remember that mental health issues do not mean someone is weak, ‘crazy’, or bad. In the same way that a broken leg doesn’t make someone a bad person, neither does having a mental illness. Like a broken leg, mental illnesses are treatable and can be managed. You are not alone, and you are still you.

​This resource page contains information on several mental illnesses, as well as online educational and informational links and videos.

A symptom of several mental health disorders, drug use and various health issues, psychosis is defined as a ‘break from reality’. Because early intervention has proven effective for helping those who experience psychosis, it is important to learn the early signs and supports for psychosis.
Find out more by clicking here.

​One of the most common mood disorders, depression may be characterized by difficult emotions (often sadness, but sometimes irritability, guilt, anxiety, etc.), or a lack of emotion, changes in activity and appetite, a loss of enjoyment in activities, withdrawal, and isolation, and often a lack of desire to do anything. Find out more by clicking here. Some people experience ‘high-functioning depression’, also known as dysthymia. This video outlines the signs that someone may be experiencing dysthymia.

Anxiety is characterized by pervasive and persistent apprehension and feeling tense without cause. While some anxiety is normal and even healthy, experiencing constant feelings of anxiety is unpleasant and can interfere with day-to-day activities. There are various types of anxiety (social, generalized, phobias, panic disorder, etc.), with more intense anxiety disorders including Post-Traumatic Stress Disorder (PTSD) and Obsessive Compulsive Disorder (OCD). Find out more about anxiety by clicking here.AnxietyCanada is a great online resource for anxiety information and resources.

Post-Traumatic Stress Disorder (PTSD) is often triggered after the experience of a traumatic event (or events). Characterized by flashbacks, maladaptive avoidant behaviour, and an intense, prolonged fear response, PTSD can be very complex. Find out more by clicking here.

Characterized by issues with impulse control, ‘stormy’ relationships, unpredictable emotions, and often self-harm, Borderline personality disorder (BPD) can be difficult to diagnose and recognize. With treatments focused on developing skills for dealing with difficult emotions and addressing risky, self-harming behaviours, BPD can be managed. Find out more by clicking here.

My identity crisis has a first name (Stephanie Vicente)